We are proud to announce a new release of the Parkinson’s disease map. This PD map update brings significant changes in the content, in particular in the area of the dopaminergic synapse, and downstream. Below is a short summary of what was added.

Following the feedback we got during the curation workshop with Nicolas Le Novère in May 2017 we split the area of the postsynaptic terminal into two compartments representing striatal neurons with D1 and D2 receptors, respectively. Their different response to dopamine signaling is now better displayed in the map, take a look here. Intracellular signaling in D1 neuron shows detailed DRD1-mediated cAMP signaling including PKA activation and posttranslational regulation of PPP1R1B1 (DARRP-32) via phosphorylation. Moreover, on a broader view, the nature of the three-actor dopaminergic synapse is better represented now, with a separate input to the postsynapse of the striatal neurons, and a separate route of the dopamine signals via the dendritic spine. 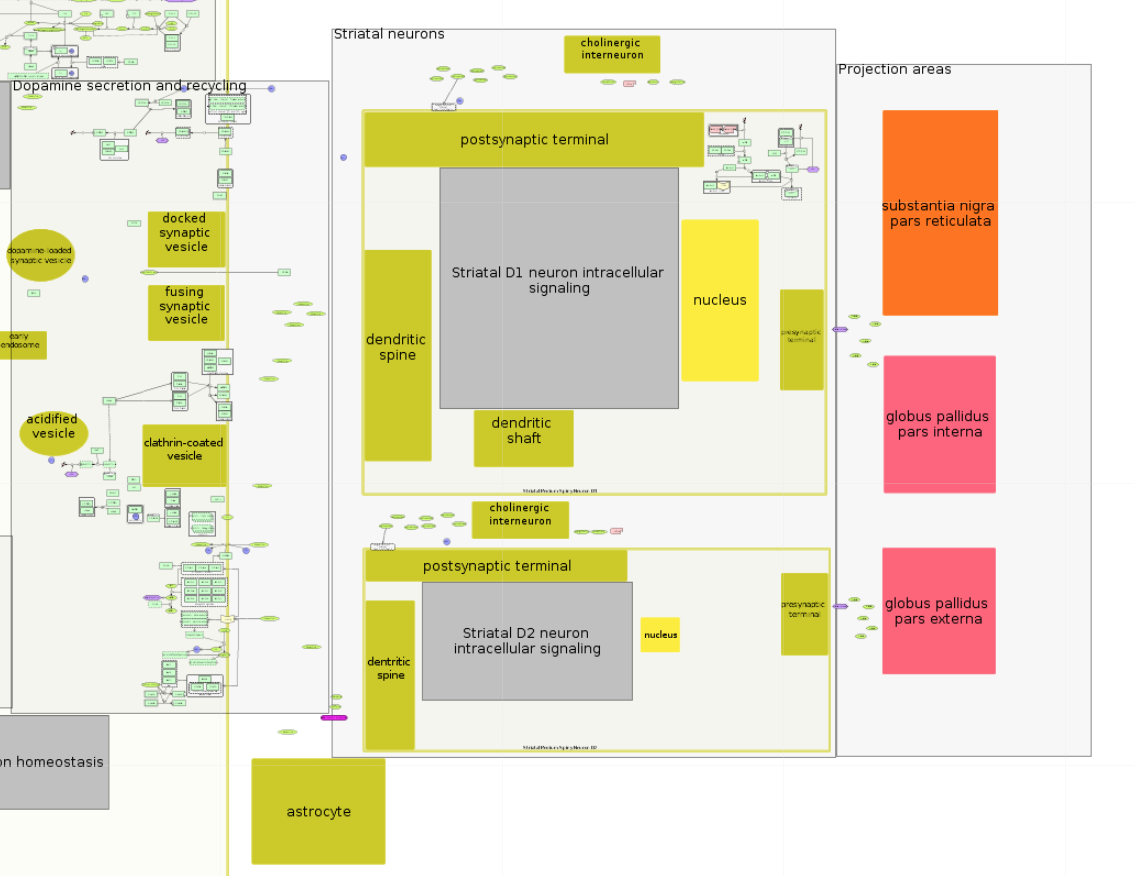 A new area was introduced to the map to describe downstream signaling of striatal neurons, based on the description of neuronal circuitry in basal ganglia linking striatum with globus pallidus and substantia nigra. At this stage it is simply a starting point, supported by literature evidence, which may be an entry point to bridge the complexity levels of molecular and neuronal networks.

The transcriptional activity responsible for dopamine synthesis and transport was improved and reorganized. In particular, the roles of NR4A2 and PITX3 are shown with more detail, including the finding about the influence of LRRK2 G2019S mutation on the dopaminergic transcription [PMID:26123485]. Special thanks goes to Jens Schwamborn, Miguel Oliveira, Amer Ashrafi and others from LCSB for discussion and input.

Other corrections and updates

Other changes include representing the role of RGS6 in the functioning of dopaminergic neurons, better representation of the role of caspases in the map, and a number of user’s comments.

All in all 80 publications were curated to the PD map. You may easily check their impact in the map by checking the “Overlays” tab in the left panel. Selecting “New in the Spring 18 release” overlay will highlight all the new, or updated interactions in the map.

We hope you’ll enjoy this release. A big thank you for Stephan, for his major contribution to the curation of the content for this release. We’re looking forward to your feedback.